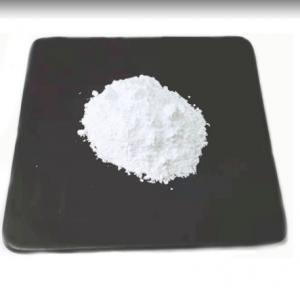 NMN (Nicotinamide mononucleotide): The full name is "β-nicotinamide mononucleotide", which is a naturally occurring biologically active nucleotide. There are two irregular forms of NMN, α and β; β isomer is the active form of NMN with a molecular weight of 334.221 g/mol. Because nicotinamide belongs to vitamin B3, NMN belongs to the category of vitamin B derivatives. It is widely involved in a number of biochemical reactions in the human body and is closely related to immunity and metabolism.

The substances inherent in the human body are also rich in some fruits and vegetables. In the human body, NMN is the most direct precursor of NAD+, and its function is manifested through NAD+. NAD+ is also called Coenzyme I, and its full name is nicotinamide adenine dinucleotide. It exists in every cell and participates in thousands of reactions. In a variety of cellular metabolic reactions, nicotinamide adenine dinucleotide (NAD) molecules play an important role and are an important support for cells to maintain vitality.

The decline of NAD in the aging process is considered to be the main cause of diseases and disability, such as hearing and vision loss, cognitive and motor dysfunction, immune deficiency, arthritis, metabolic disorders and cardiovascular diseases caused by dysregulation of autoimmune inflammation. Therefore, supplementation of NMN increases the NAD+ content in the body, thereby delaying, improving, and preventing various phenotypes related to aging, or age-induced metabolic disorders, senile diseases, and so on.

With age, the decrease of NAD+ level leads to the decline of DNA repair ability, accumulation of DNA damage, and drive the aging process. NAD+ participates in cellular respiration in cells and promotes energy metabolism (such as oxidation of glucose, fat, and amino acids). NAD+ is not only a coenzyme for hundreds of redox reactions in living cells, it also acts as a substrate to regulate cell survival, cell apoptosis, DNA repair, immune response, circadian rhythm and other physiological functions. 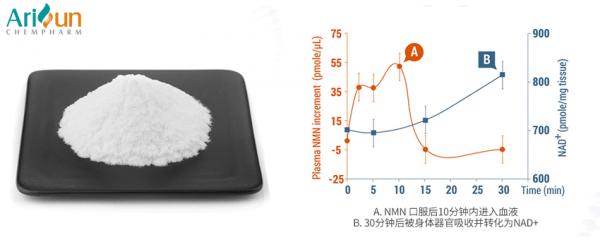